UAF eCampus has been lucky to have a Double robot loaned to us for the past few weeks. We love to explore new technology here, so having a telepresence robot was more than cool. I had been able to drive it around a few times before, once from Japan when it was in London, but being able to see in person how others use it and respond to it, and to interact with others via the robot was 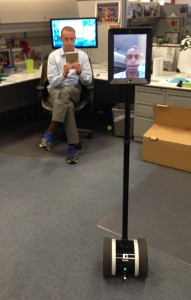 Over the past two weeks, I’ve tried to peel away the layers of techniness, newness, and flashiness that new technologies naturally have, but that can sometimes obfuscate shortcomings of the device or simply be distractions to the fact that the device is really nothing new at all.

Well, I think that the Double is something new. I think it’s the real deal. It does have some shortcomings, but the device, if used purposefully and creatively, has some clear affordances that cannot be had with other telepresence technologies.

First, the robot provides real autonomy for the remote user, as they are perceived as a physical entity. Provided the user is in a friendly environment, they have complete control over the robots movements, which means that they 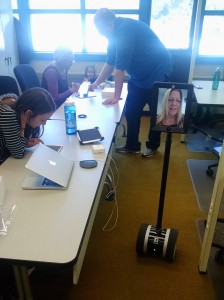 can enter and leave both rooms and conversations at their own will. They can
also enter the robot at will, and leave at will. When I took the Double to a training session at the UAF U-Park building, a colleague was able to call in and make her presence seamlessly part of the room. The robot wasn’t  there  until she was. It had no presence until she arrived. She didn’t disturb the flow of the room by arriving, and had no problem leaving. It’s almost like she had simply walked in, and then walked out a while later. It was surprisingly natural.

Second, the Double give a remote user a great amount of control. This really enhances their sense of being present in the physical location.  During a visit to the UAF Museum of the North last week, Director of Education and Public Programs Jennifer Arseneau remarked how much more natural it was to give the robot a tour than if she had been holding a tablet  and pointing it around. In that 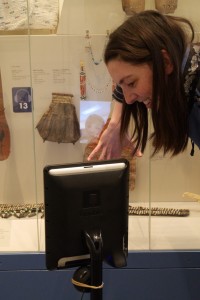 situation, the tour may have been disorienting for both parties involved, and lines of eye contact would have been back and forth between the device and guide. The remote presence would have been slaved to the physical guide, not independently negotiated between them. This ability to be in control of one’s own field of view, position and speed makes one consider and feel the space they are in.

Third, the robot provides real opportunities for meaningful  interaction. The possibility for simple interaction is obvious, of course, but it’s almost 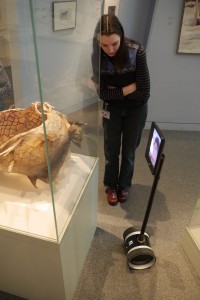 too  obvious, so that our imaginations stop at a rather uninspired point.  Here are some of the obvious scenarios:

These are great uses, and probably justify the purchase of a Double, because it does them well. The Kodiak Island School District is making great use of Doubles in this way. But they are not groundbreaking concepts. This dynamic has been in use for half a century, with students attending class and receiving lessons over shortwave radio, such as in the Australian Outback and Bush Alaska. Essentially, these uses simply extend the existing paradigm of students and teachers in classrooms. 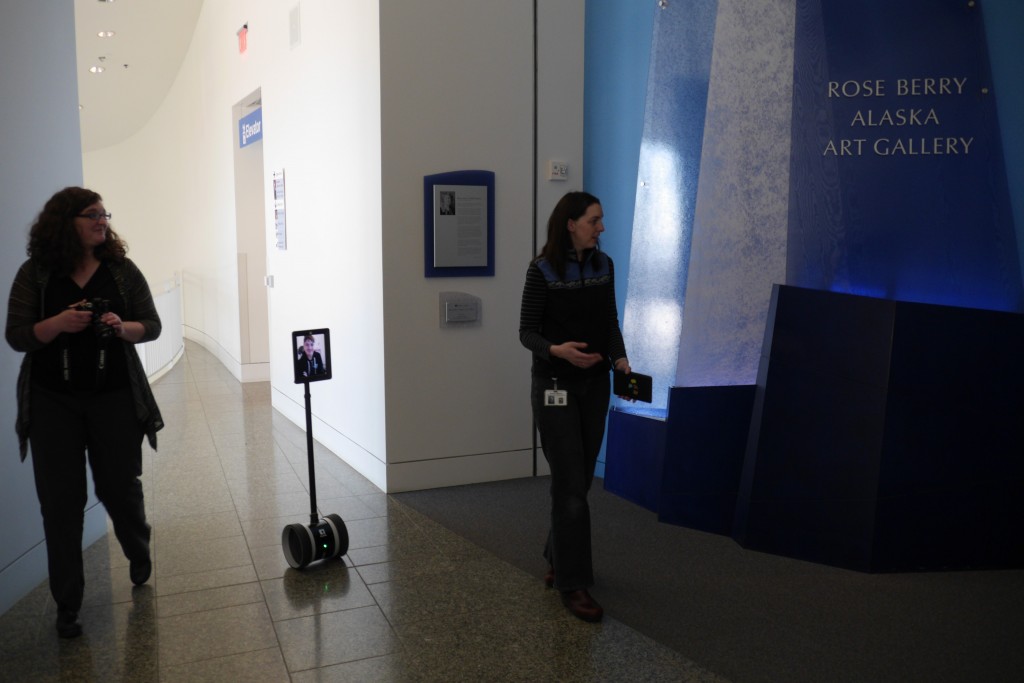 At its core, the Double device is an iPad on a Stick on a Segway. It’s a remarkably simple design and not incredibly groundbreaking when considered as an assembly of parts. So why can the Double afford users something that existing technologies cannot? It’s because it makes use of our human tendency  to treat the robot as a person. And unlike existing technologies, it is present. Let’s not even use the term “virtual presence” or even “telepresence.” There’s nothing virtual about the robot. There’s nothing virtual about the person on the other side. They are both real. And after a little time with it, the physical interactors start to treat it more like a human than an iPad on a Stick on a Segway.

There are some downsides and some concerns. While the base model is $2,499, I think that both the audio kit ($99) and the charging dock ($299) are absolutely essential. Without the audio kit, the remote user has no ability to assert themselves aurally, and in noisy environments is effectively mute. Without a charging dock that can be entered and departed with the controls of the robot alone, the end user is at the mercy of whoever in the office remembers to charge the robot at night, and if they call in while the Double is still plugged into the wall, then they’ll need to get someone’s attention or (shudder) call them  on the phone to say “Hey, come unplug me!”

There are some practical hurdles and things to be aware of:

There are some social and usability concerns:

Some features that would be nice:

I think that these are not dealbreaking concerns. Some of them are not the fault of the engineers or designers of the device, but social realities. Hopefully people will treat the robot as kindly as they would a human. In terms of features Double is actively adding new ones,  such as screensharing with multiple users.

The Double is obviously a first-generation device, but like the Apple II or original iPod, it is going to set the standard for future devices of its type even though it is still worth buying Version I. I hope to one day get to drive a Double II, but for now, it’d be great to have a Double I around the office.