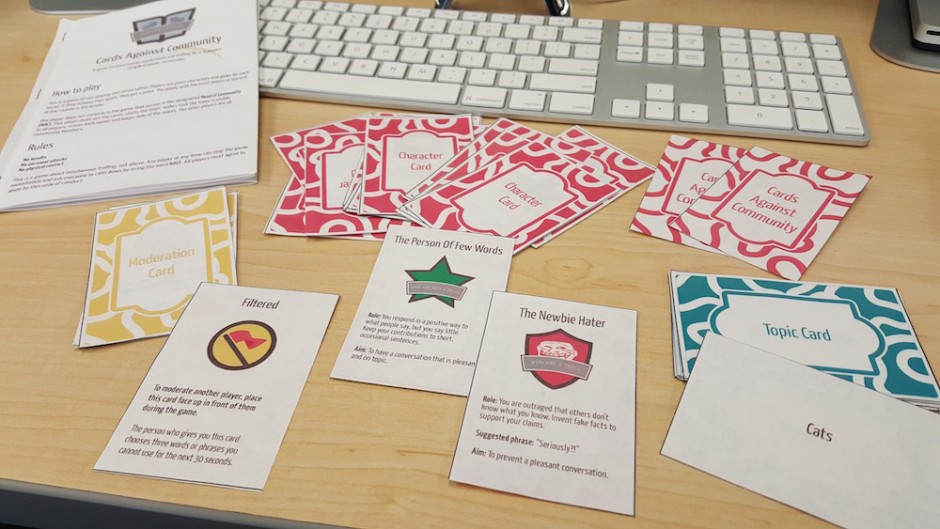 Creating and managing rich and productive online communities is one of the major challenges in teaching online. It’s an area of focus here at UAF eCampus and we devote a lot of attention to helping faculty facilitate positive discussions in their courses. The question of how to manage a discussion forum effectively can end up being very specific to an instructor’s situation, but it is still possible to have a general awareness of the types of actors that frequent online discussion forums. Bringing this understanding to the task of online moderation  can help to manage them effectively. Cards Against Community, a new card game, tries to do this in a fun, face-to-face way.

I came across the game on Twitter. Alaska Dispatch News recently changed its online commenting system from Facebook to Civil Comments, which uses a peer-review driven algorithm to weed out uncivil comments, without the need for moderator review of each comment. It seems to work brilliantly. After following Civil Comments (@HelloCivil) on Twitter, I stumbled across Cards Against Community and was immediately intrigued. It was created by The Coral Project (@coralproject) and is described as “A game of conversation, moderation, and trolling for 4-6 players.” It seeks to spark thought about “how moderation tools and community structures change users’ experiences online.”

These are laudable goals, and I thought that it deserved a playthrough. Last Wednesday evening, several colleagues and I sat down and played through the game twice. Here are my thoughts:

The Head of Community role is absolutely necessary.

We started out the game with only four participants, which is actually not enough. The game can be played with 4-6 players, but an additional person is always needed to act as “Head of Community” (HOC). I skirted this rule by acting both as a player and as HOC. It became clear after a few rounds that someone needs to be impartially monitoring the discussion and keeping track of player contributions. I wasn’t able to remember the choices I had made as HOC once I entered my role as a participant. It’s important to keep these separate, just as you might in an online discussion. So, you really need at least 5 people to play this game effectively.

The topic cards are not interesting.

One of our first conclusions was that the topics themselves were not generating discussion. Much of what we actually said on  given  topics (newspapers, cycling, Disneyworld) was flat and uninspired. It felt a little forced, and we all agreed that the topics were not intrinsically interesting or engaging. We suggested writing topics in the form of more divisive statements, or as questions without simple answers. One player even suggested that we simply use a deck of white cards from Cards Against Humanity as the topic cards. In any case, the existing topic cards need to be abandoned or rewritten with more vim before we use them again.

Moderation cards are hard to play within the allotted time span.

The two minute limit seemed too short at first, but by the end of the second play-through, it came to feel about right. However, we never became proficient at using our moderation cards effectively during the rounds when each player gets one. I realize that this might be a deliberate mechanic to demonstrate how vigilante moderation doesn’t work, but it felt frustrating. During round 3, when one player becomes a moderator participant and has all of the moderation cards to use as they see fit, the conversation seemed to flow more smoothly and the game was more fun, partly because none of us had the burden of trying to think about our moderation card as well as our own aims for our role.

The character cards reflect the spectrum of possible participants.

The character cards seem to be the most polished and well thought out part of this game. Some could be refined so that they are more obvious to first-time players (some of us played our roles very inaccurately at first) but they span the range of possibilities quite well.

I like this game. It’s visually appealling, free, open to modification, and is about 80% effective at bringing participants to a critical point of thought regarding how online communities work and how moderation changes them. Some aspects, such as those above, could be improved or simplified. I might remove or collapse the “Aim” description on the character cards, since the options are binary – you are either a troll or you are not – and this should hopefully already be obvious to players. I also might remove the points-based play from the game. We did not play with points, since I was unable to manage that as HOC and a player. In the end, we had a lot of fun without even considering points. Cards Against Community is a fairly simple, free, thought-provoking game with some room for improvement (and that allows users room to improve it!). I hope to use it in a faculty development seminar next month. You can download the PDFs of the cards for free or purchase printed cards of the game at the Coral Project website.