One of the first projects I was given responsibility for since being hired here at UAF eCampus was the production of video teaser and a promotional segment for a Massive Online course UAF is offering in the fall. The course is excellent, and I encourage you to check it out and recommend it to anyone you know who is interested in biology, animal research, or the human condition of obsessive compulsive disorder.

These projects were a good opportunity for me to refine my rusty video editing skills and to learn how to use Screenflow, which is a fairly powerful screencasting and video editing application. While not intended as a dedicated NLE (non-linear editor), Screenflow has many of the same capabilities, and its slick WYSIWYG interface makes it easy to put together small projects very quickly.

For example, this 36 second video was very easy to create in Screenflow:

This is what my timeline in the Screenflow project looked like: 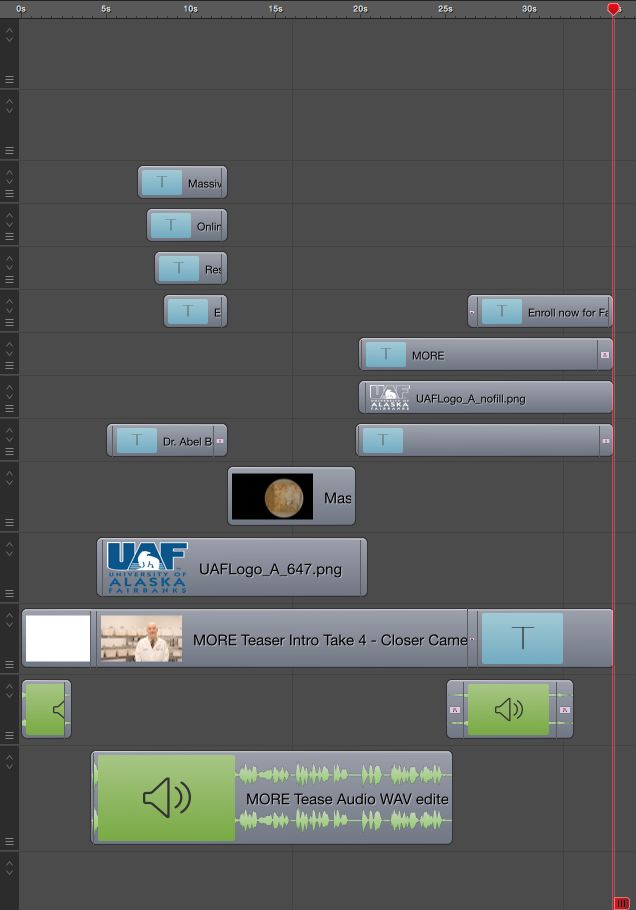 My next project after this was to make a longer, 3-4 minute promotional video that went into more detail about the course. I continued to use Screenflow for this, but it soon became apparent that the software was not designed well to handle large projects. Organization was harder and harder to manage, and I came across several ways that I could crash the application every time. Adjusting audio levels in clips caused the program to crash, each and every time. That is a problem. Additionally, Screenflow stores all project media inside the Screenflow file itself. This makes management and archival easier, but it can be a real pain when you are concerned about hard disk space. Finally, some of Screenflow’s default behaviors for clip management are not as sophisticated as I have come to expect from Adobe Premiere or Final Cut Pro. Maintaining consistent syncing across the timeline is important, but Screenflow’s “close gap” action only acts on that layer in the composition, not the entire sequence. Considering that my timeline had 10 layers of tracks in it, this function was essentially useless to me. Instead, I would select all clips I wanted to retime, and drag them accordingly. The ability to nest and group clips was partially useful to avoid this, but some of the hierarchies were not clear, especially concerning audio levels, which seemed to lag behind the settings changes I was making.

My timeline in the longer video:

Screenflow is a great piece of software, but I have already vowed to myself that for my next complicated project longer than 5 minutes or with more than a bit of timeline complexity, I will try my best to get up to speed in Adobe Premiere.

I am extremely proficient at getting Screenflow to crash, even (especially) after the newest 5.0.2 update: